Welcome to Our Community!

“Holy Infancy, founded in 1861, is now the oldest Roman Catholic Church in Bethlehem. 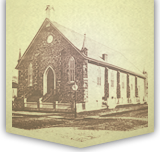 Catholic congregations formed first in Easton and Allentown before Bethlehem, and priests came from both cities to serve Bethlehem Catholics during the latter half of the 1850s, according to Joe McCarthy, Holy Infancy’s business manager.

By 1861, there was enough of a demand for a Bethlehem parish that Saint John Neumann, then the bishop of Philadelphia, started a local congregation.

The church is quite proud to have been founded by a saint, said Monsignor Robert Biszek, the church’s pastor since 1997.

“Not many churches in the United States can say that,” he said.

Construction on Holy Infancy, first called Church of the Nativity, started in 1863 on land donated by the Moravians (4th and Locust St. in south Bethlehem), who owned just about all the property in the city until they started selling some of it in 1848, McCarthy said.”

The current Holy Infancy was constructed on the same plot of land and dedicated September 17, 1882.